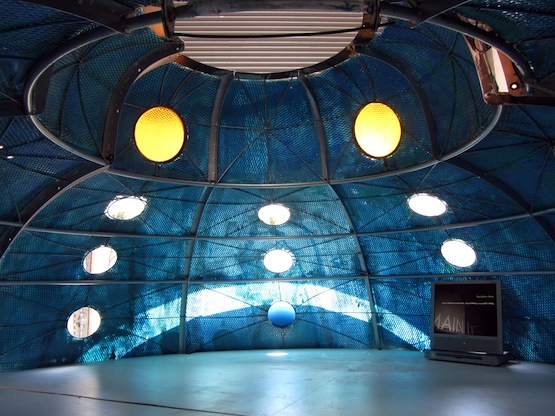 The road up the mountain was winding and treacherous.  Steve cursed as he jerked the wheel to miss an ill-placed rock.  The night air steamed through the rolled down windows.  It was hot.  "Is it getting hotter in here or am I imagining things? Sheila said."  Steve turned one last bend and they were on top of the mountain.  Suddenly and strangely, it was daylight.  "WTF! Steve cried"  The Winnebago lurched to the side and a greenish glow enveloped them.  Time seemed to stop; the van was in the air and they heard a loud humming.  Gail and Barbara dove to the floor while Sheila and Bob looked out the window, first at the receding ground below and then up.  They gasped: a space ship loomed directly above and was pulling the Winnebago directly towards a gaping aperture.  "Tractor-fucking-beam! Steve screamed."

With the sound of a mechanized snap and a thump, the Winnebago was still.  All was dark.  A barely perceptible light grew in the chamber.  They looked at each other in disbelief.  All the doors flew open at once and they tumbled out of the RV and stood, now shivering, on a cold metal floor, gaping into the dim light.  A tall and dark figure walked up to the ship.  It was what appeared to be a woman, her eyes sparkling and face smiling.  "Welcome, she said.  My name is Iris." 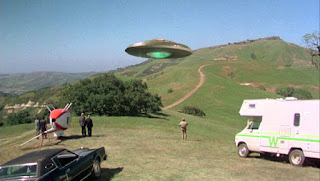 The respite at Echo Valley was much needed.  The Getaway Drivers stayed nearly a year, working on the farm and keeping out of sight.  But they were restless and needed to get back on the road.  Saying goodbyes on that spring evening was hard, but summer loomed and there was work to do and money to make.  They had lost Tom and Dan during the winter.  Tom found his one true love- a woman from Chicago who seemed to know what he was thinking before he said it.  They moved on to a quaint small town fond of troll statues and settled in a new old house with some of the dough they'd made.  Dan took up revival preaching full time, having discovered a new talent.  Steve had traded the van for a Winnebago off in town.  He fired it up and off went what was left of the gang towards Wildcat Mountain.  With Steve at the wheel, they plunged down the narrow dark highway as the sun set. As the the mountain appeared like a Mordor shadow in the star-filled sky ahead, Sheila said, "Hey, what are those lights, and did that star just, like, move?"  Little did they know what was going to happen next. 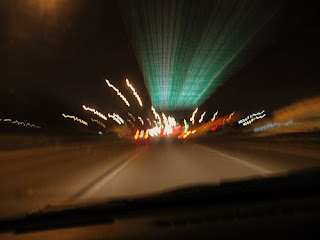 The revival was bank. No had one expected that instead of the 'Drivers playing a show, Dan would have to give the impromtu sermon of his life. Sheila and Tom had passed the collection plate around not once, but twice after the "speaking in tongues" incident. Gail and Steve finally figured out whatever they were tinkering with in the engine compartment, and near midnight The Getaway Drivers finally pulled out of Texarkana and found themselves hurtling north on I30 towards a town called Hope with a garbage bag full of cash in the back. It it wasn't long before they noticed the flashing red and blue lights in the rearview. Someone at the revival figured out they'd been taken for a hoax. Bob cursed and took another pull from the Soviet era flask Steve had given him. He flicked a switch acitivating the hydrogen carborator his cousin James had installed on their last trek north. The van lurched forward, rattling like a space shuttle on it's last flight, and the police lights receded into the night. They would hit Little Rock by 2, then Memphis, then north on 55 all the way to Echo Valley. They had a show to do and this time among some hippie friends who wouldn't mind using a little of that cash for supplies. The 'Drivers would be only to happy to oblige for a chance to hideout for a while. 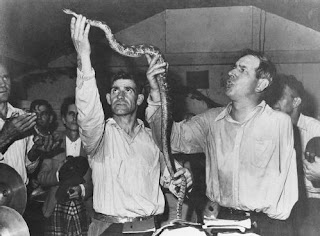 With each rise and fall of Dan's voice, the spiritual agitation grew, and the night wore on, hot and sweaty. The crowd pressed closer, mezmorized by the cadence and reverberations coming from the guitarist's mouth. Tom and Sheila hung toward the back, collection plates in hand, waiting to strike at the most opportune moment. Back at the van, Gail and Steve were jimmying something under the hood while Barbara listened intently, sucking hard on her smoke. Suddenly, Dan's words didn't make sense. A murmer rose through the crowd and grew to an undecipherable cacophony of speech Barbara had never heard. People wept. Hands were raised, forgiveness given, and finally the exhaused worshippers collapsed. Tom and Sheila struck with the collection plates, and Dan disappeared. As he ran up to the van with this guitar case, Barbara looked at him suspiciously: "What the HELL was THAT?" she said. "Don't ask. I don't know what it was, but let's get out of here..." 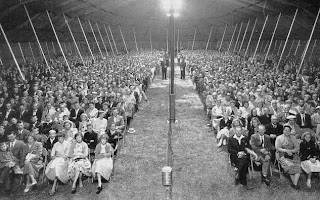 As they walked out onto the stage, The Getaway Drivers realized that the "gig" Steve arranged was not at all what they expected. Thinking on his feet, Dan pulled a bible out of his guitar case. It was going to be a long, hot night at the revival. 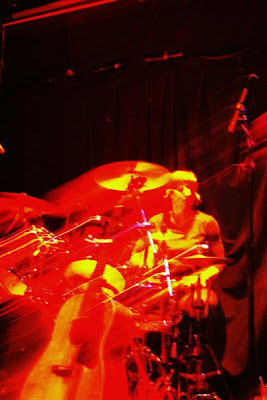 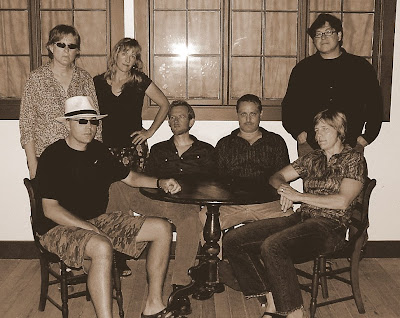 Dan & Barbara've been with us a year.
She-Gail for three.
The other Drivers' pedigrees trail off into the mists of time.
We just opened at the Majestic.
This is getting serious. 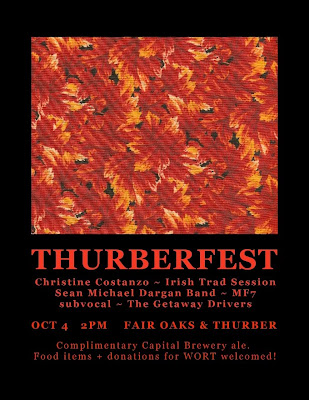 Pour a hot latté down your subvocal Getaway! 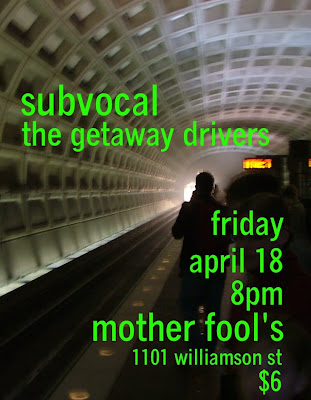 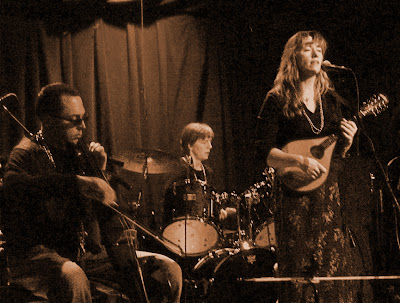 Aha . . . here they are. None, be they however elusive, can escape the able tendrils of Blogger.